12:29 Welcome at the last round of the 2020 Batavia tournament! The last round started at 12:00 and we’ll give you some live updates every now and then. Dimitri Reinderman is leading the tournament with 6.5 out of 8, but nothing has been decided yet, as Tomasz Warakomski is trailing by half a point. Aljoscha Feuerstack (5 points) and Lawrence Trent (4.5 point) are the other main contenders for the first three prizes. We also have prizes for the best game (€150) and best endgame (€150). The jury for these prizes consists of grandmasters Erwin L’Ami and Peng, assisted by yours truly.

12:41 Edwin van Haastert unfortunately had to withdraw after seven rounds, as he has been ill all week. That means that Friso Nijboer has a free round today, but that did not prevent him from coming to Cafe Batavia anyway, most likely eager to play a bunch of blitz games. If this live blog is not up to date, you know who’s fault it is. As always, everyone is most welcome to visit the venue. The weather is really nice today and we are right across from Central Station.

12:45 According to Friso, all games are more or less balanced so far. Reinderman may be a tad better from an English opening against Trent, but the rest really looks balanced. Warakomski-Sukandar and Feuerstack-Zwirs are Anti-Sicilians, while Bosboom-Admiraal is a Sicilian with colours reversed. 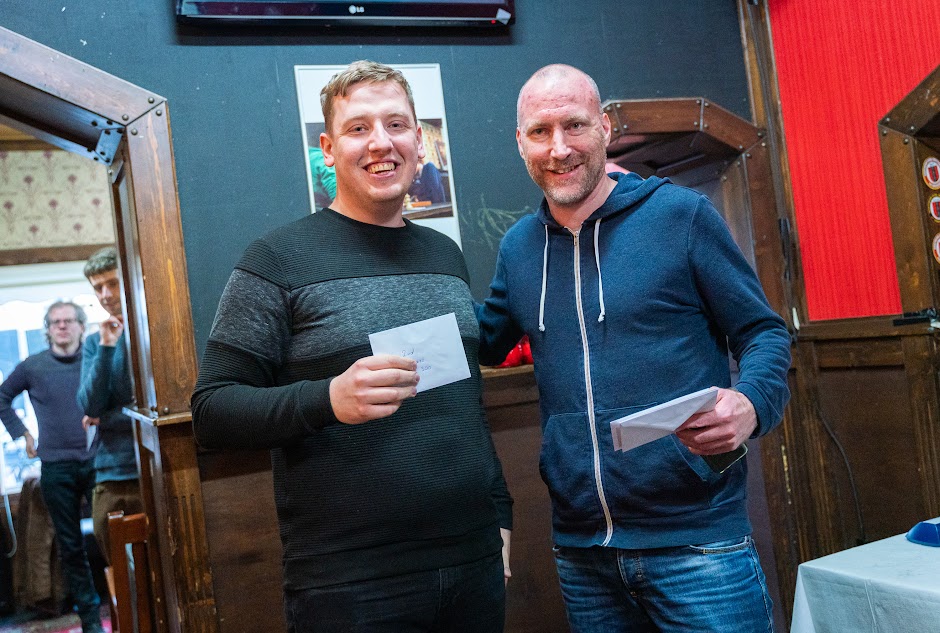 15:38 Many people are gathering at Batavia by now, and indeed the many blitz games with Friso Nijboer happened and are still happening. On to the most important news: Dimitri Reinderman kept increasing the pressure and went on to beat Lawrence Trent. That means that with a very impressive 7.5 out of 9 Reinderman is the well deserved tournament winner. Congratulations!

15:41 Meanwhile, the position at Feuerstack-Zwirs remained balanced all along, the moves were repeated: draw.

16:02 The same result was reached at Warakomski-Sukandar, but after some cool action. The position looked a bit more pleasant for White, but Tomasz does not think that way: he lashed out the double-edged 24.g4!?. The position became rather complicated, with Black getting play against the white king. Eventually, that was good enough for a perpetual. That means Tomasz Warakomski clear second, Aljoscha Feuerstack clear third.

16:05 Miguel Admiraal and Manuel Bosboom both had a very rough tournament and in the final round played eachother. Miguel achieved a good endgame, which he converted convincingly. That means: