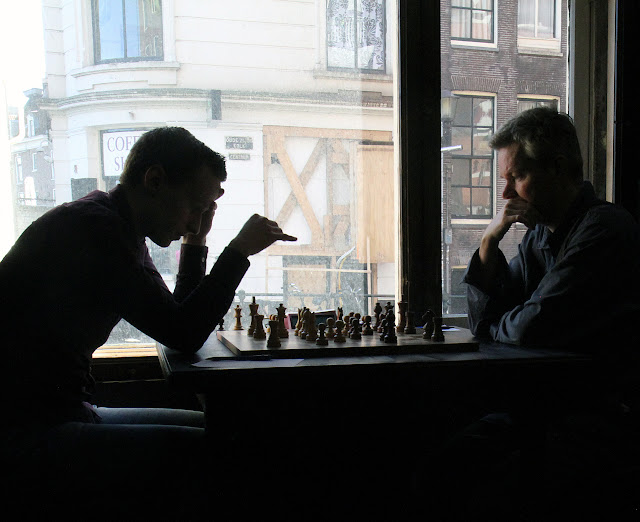 12:55 The final round has started at 12:00 and promises to be very exciting. Lars Schandorff and Stef Soors are leading the tournament with 6 out of 8. Friso Nijboer and Sabino Brunello are following with 5.5 out of 8. Moulthun Ly and Arthur Pijpers are on 4.5 and the other Dutch players are further behind. Soors needs a draw with White against Nijboer for a GM norm, but the Dutch grandmaster will play for a win, since he can still win the tournament himself. Schandorff can secure tournament victory with a win today, but that won’t be easy with Black against Pijpers. Brunello will surely true to win his game with White against Van Foreest. The winner of De Ruiter-Ly will turn a normal tournament in a good one. Haast and Willemze both didn’t have a very good tournament, but a win in the final round would be good damage control.

13:12 Soors-Nijboer has gone out of book as early as move 8, when White played 8.Ne2. Nijboer chose the Modern Defence today and Soors avoided the main lines. All pieces are still on the board and the stage has been set for an exciting last round thriller:

13:14 Pijpers-Schandorff followed the recent game So-Carlsen from Qatar, until White deviated with 16.bxc4. It seems that White is a bit better due to his space advantage, but anything can still happen in this game as well:

13:40 Thomas Willemze got everything he could wish for from his Scandinavian opening. Anne Haast got attracted by a sharp line that turned out to favour Black. The main line is considered to be 8.a3 and personally I think 5.Bd2 might be a smart move order. In the current position Black is a healthy pawn up in the endgame:

13:52 The position is still full of tension at Brunello-Van Foreest. The Italian grandmaster didn’t achieve anything with his Catalan against Ly a few rounds ago, so today he opted for 4.e3. The pawn structure with hanging pawns on c4 and d4 is a classical one. White is playing for piece activity in the middlegame, Black hopes to get the upper hand in the long run. White’s last move 14.c5 looks a bit premature, but action is guaranteed in this game:

14:04 Danny de Ruiter did go for the Catalan against Moulthun Ly, but he lost the compensation for the gambit pawn along the way. Theory recommends either 8.Bg5 or 11.b3 as improvements for White. Danny decided to give up an exchange, but Black is better now:

15:23 Thomas Willemze went on to win the endgame against Anne Haast. Both players have experienced that a lot of theoretical knowledge is required to be able to compete on this level.

15:30 Moulthun Ly is now a pawn up in the endgame against Danny de Ruiter. Lucas van Foreest has interestingly exchanged his queen for rook+bishop+pawn against Sabino Brunello. The Italian grandmaster is not getting anything for free today.

15:52 Stef Soors blundered horribly and went from a winning position to a losing position in one move:

Here 38.Qa4 Ba6 39.c4 would leave Black paralysed and wins for White. Instead, Soors played 38.Rb2?? and now Black is suddenly winning after 38…Ba6. Nijboer is now a piece up.

16:05 Arthur Pijpers was doing very well at some point against Lars Schandorff. For example 34.f3 with the idea 34…c3 35.Nc4 is a big advantage for White. In time trouble the Dutch IM lost his advantage and now the position is very unclear again:

The situation at the top is now: Nijboer 6.5, Soors and Brunello 6. With a draw Schandorff also has 6.5, if he wins, he wins the tournament.