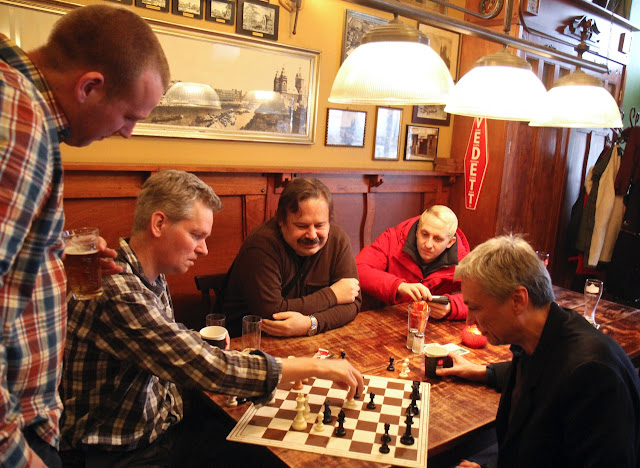 14:34 After three rounds the grandmasters are dominating the Batavia tournament. Nijboer and Brunello are on 2.5 points and Schandorff is on 2 points. Only Ly from Australia and Soors from Belgium managed to get a plus one score, but they are probably not happy with their somewhat shaky play so far. Arthur Pijpers plays solid chess, but didn’t get to full speed yet. The other Dutchmen (and woman) have been suffering up to this point. Let’s see what today brings!

15:00 Nijboer-Schandorff is the first pairing between grandmasters this week and they are having a long theoretical discussion in the Keres variation of the Ruy Lopez. With 24…Nxh3+ Lars played the first new move, which led by force to the diagram position:

Materially speaking, Black is fine with two pawns for the exchange, but of course the white rooks are quite active. Some explorative analysis suggests that White remains better, but Black has good drawing chances with his compact position.

15:22 Soors and Brunello are following a long theoretical line as well, in the Spanish Four Knights. This line ends in a perpetual check though, which was first played in Vallejo-Dominguez, Cuernavaca 2006.

15:38 In Willemze-Ly, the Dutch IM unfavourably changed the pawn structure with 10.e5?! (normal is to keep manoeuvring with 10.Nf1), since now he is stuck with a backward pawn on d3.

15:44 Nijboer decided to offer a draw, since he was getting very low on time. Schandorff had no reason to decline. Soors-Brunello indeed ended in a perpetual.

15:51 Anne Haast did not feel like long theoretical 1.e4 lines today and played 1.b3 against Arthur Pijpers. An interesting position appeared on the board, but just like Willemze, with 10.d4?! she unfavourably transformed her pawn structure and now Black seems to be on top:

16:07 In the fifth game of today, Lucas van Foreest didn’t play a very convincing Alapin Sicilian, but Danny de Ruiter also hesitated somewhat in his play. After 20.a5 a critical position arose:

Van Foreest-De Ruiter after 20.a5

16:32 It seems that Moulthun Ly missed a chance for a large advantage, since he could have played 23…Rd2. Black is still better, but at least Thomas Willemze got rid of his weak d-pawn.

16:35 Van Foreest has cashed in too early on Black’s weak a-pawn. 27.Rxf7 was a fancy move, but the sober 27…Bf6 neutralises everything.

16:40 Pijpers is clearly on top by now, but the position remains very sharp. Let’s see what Haast will still come up with.

16:57 The picture remains unchanged: De Ruiter en Willemze have repaired their positions, while Pijpers has a winning position: