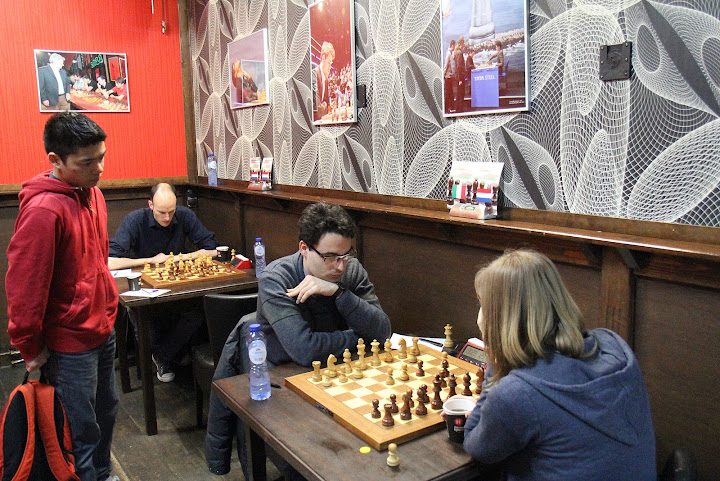 15:24 The top pairing of the third round is Moulthun Ly versus Friso Nijboer. Friso is playing his favourite Classical Sicilian, but he seems unfamiliar with 16.Bc4!, a powerful relatively new move first played by Georgiadis and later played by Grischuk and Ganguly.

Moulthun already played a model attacking game against Dubov’s Classical Sicilian in Qatar, so he can be considered a true expert for White in this opening. By now the Australian candidate grandmaster is almost an hour up in time.

15:48 Lars Schandorff knows his openings well, and he did get a positional edge with White against Stef Soors’ Bogo-Indian.

18.Qd3 may have been a bit too careful though, whereas the straightforward 18.b5 looks nice for White. Black possibly should have tried 18…g6 (to get the bishop to f5) instead of 18…Re8.

16:33 Danny de Ruiter decided to go for the endgame that is known from a notorious Carlsen-Anand World Championship game.

Here Arthur went for 22.Bd3 followed by Be4, but without bishop pair White is no longer better. 22.Re2! followed by Rb2 would have been pretty manoeuvre.

17:34 Thomas Willemze beat Lucas van Foreest in a pretty attacking game. Lucas probably should have closed the position with 13…d4, since 13…dxe4 gave White the central stability he needed.

Here Willemze found the key move 20.f4!, after which his attack crashes through.

17:49 Sabino Brunello beat Anne Haast in a theoretical discussion in the 3.e4 b5 variation. Not an easy start of the tournament for the Dutch lady, but she always fights back.

17:55 All games have finished now and Café Batavia is still packed with chess players. The three remaining games were all drawn. A final quiz question: how could Nijboer (who solved his problems impressively) have won in the following position?