The first round of the 12th edition of the Batavia Chess Tournament illustrated the fighting spirit that all participants brought to the tournament from the very beginning. This round was filled with excitement as we saw tactical skirmishes, strong technical play and perhaps most surprisingly; blunders. Let’s jump to the games.

3.d4 cxd4 4.Nxd4 g6 The accelerated dragon, an opening which often promises excitement as black tries to obtain a better version of the regular Sicilian dragon (in which often dynamic play is seen) by delaying movement of the d-pawn in order to play d5 in one go.

5.c4 The downside of choosing this move order is that white can aim for a Maróczy Bind. The character of the position changes to a more positional struggle in which white will aim to control all the black pawn breaks (b5 and d5) in the centre in order to limit the manoeuvring space of the black pieces.

5…Nf6 6.Nc3 d6 Now black aims for the regular dragon-structure, as the white pawn on c4 will not allow the d5 break easily. In the meantime, white has made the concession that he will not castle queenside as his king would then become very vulnerable with the c-pawn being on c4 instead of c2.

11.0–0 a4 Black aims for more breathing space and is trying to stop white from advancing his queenside pawns (where the majority of three against two allows him to create a passed pawn in the future)

17.Rc2 Nd7 So far, the players are still following the most common line

18.Na4?? The first novelty, and unfortunately a blunder that hangs a piece based on the pin of the b3 pawn. Black can capture on a4 with his rook and thus defends the queen. If white would capture back on a4 it leaves his rook on b1 to the mercy of the black queen.

An unexpected ending to the first game that started as a theoretical battle; a black win within 20 moves. We will now take a look at a game in which the white player favoured a creative battle over a theoretical one. Which

1.e4 e5 2.Nf3 Nf6 3.d3 Nc6 4.Be2 White has chosen for a timid setup for his pieces. Leading to a position that might best be described as ‘a reversed philidor’, which was succesfully used in the past by none other than the creative Jobava. He has scored wins against absolute top players such as Svidler and Dominguez.

4…d5 The most active response, fighting for the center right from the start

6…a5 7.h3 Here Trent deviates from how Jobava approaches these positions.

7.a4 Is the choice that Jobava has made in his wins against both Dominguez and Bok. The idea is to not allow black to win more space on the queenside, to further secure the c4 square for the knight by preventing b5 and thus to have the a5 pawn as a potential future target for the white knight 7…0–0 8.0–0 Re8 9.h3 h6 10.Re1 Be6

7…0–0 8.Qc2 a4 9.Nf1 Re8 10.g4 White is clearly aiming for the black king, but in the meantime he is behind in development and is creating potential weaknesses on the kingside by moving the pawns. In case his attack does not succeed it will be difficult to imagine the white king ever finding complete shelter on either side on the board with pawns having moved on both flanks.

10.Ng3 d4 11.0–0³ Would seem like a safer choice, but it is not clear what white has achieved from the opening as there is no initiative going on yet on the kingside and black is the stronger side on the queenside.

10…d4 11.Ng3 Bf8N The first new move, black is planning to undermine the white pawn structure by playing a3

12.a3 Defending against the black threat of a3, but permanently weaking the square b3.

12…Nd7! Black is right away aiming for the b3 square with his knight.

28…d3 29.Bd1 Ba8 The weaknesses on the kingside become targets

Resulting in a second black win for the day.

Peter Doggers and Lawrence Trent during the Hand & Brain tournament

11…Be5 Both sides are fighting over control in the centre with their pieces. White can hope to develop an initiative by pushing f4–f5. In order to do this, he will however give up control over the strong e5 square.

42…g5 43.c3 h6! A zugzwang position. No matter what white makes, it worsens his position. All pawns moves allow black to move closer and a queen move drops a pawn. See diagram 5.

A lot of blood was shed in the first round. Surprisingly mainly by the black players. Let us see if this trend will continue in the rounds to come. 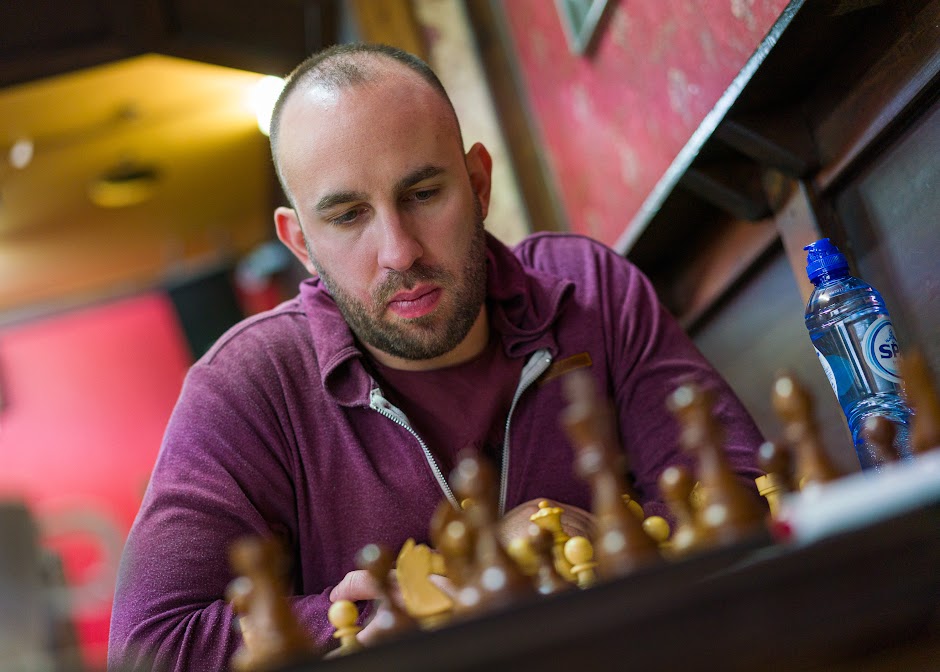 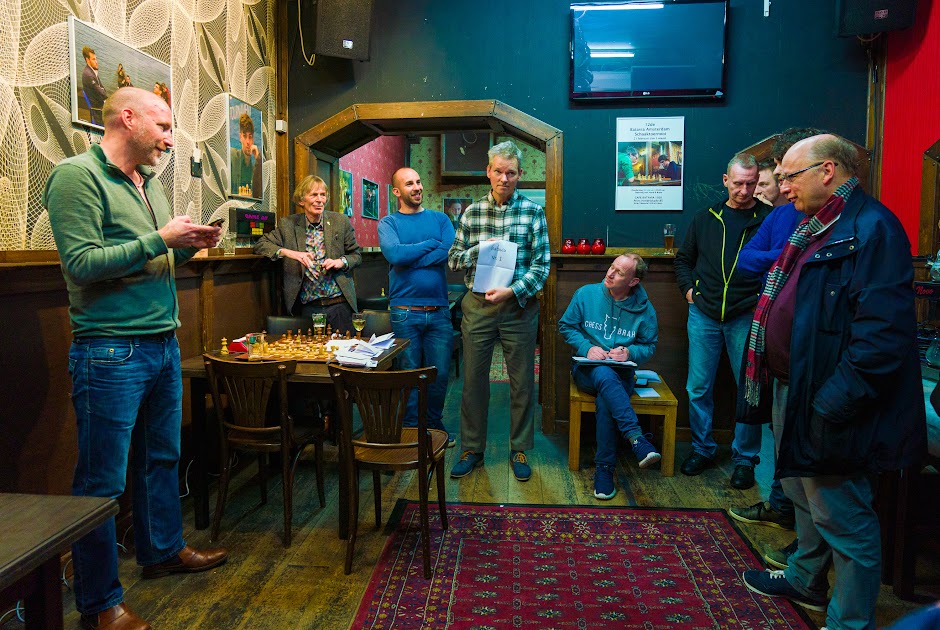