The first encounter in the tournament between grandmasters was arguably the most exciting game of the round. The game Ernst – Smerdon saw the Stonewall variation of the Dutch Defence with white going for a thematic, yet daring and attractive breakthrough in the centre:

Following 16.e4! fxe4 17.Ng5 Nf6 18.Qc2 Qxd4 curiously white is temporarily three pawns behind but by no means worse. He soon collected two of them back but then missed his greatest chance by refusing to pick up the third one too.

Black last move 22…Qf6 attacking the bishop is aimed at preventing a queen intrusion to h5. And here both rivals missed the invisible brilliant winning move 23. Qxc4!! With the idea to meet 23…Qxg6 with 24.Qc5! Surprisingly there is no proper alternative to stop the nasty threat 24.Qg4 whereas 23…Qg5 might simply be demolished by 24.f4 while the more natural 23….e5 would be met by the lethal 24.Rb6!

White instead chose for the more positional 23.Rb6 allowing black a narrow escape after which the Australian even obtained a winning counter attack with the help of that very same pawn which should have been liquidated in the first place.
Nevertheless the thriller was not over yet when in the time scramble it was now black’s turn to return the favour.

The obvious 34…Re8! would have decided the battle on the spot however black was able to come up just with the weak 34…c2?? Whereas following 35.Rf1 Qc5 36.Rc1 Qd5+ 37.Qxd5 cxd5 white managed to hold the resulting rook ending comfortably and draw was agreed when the last pawn was captured on the 59th move. 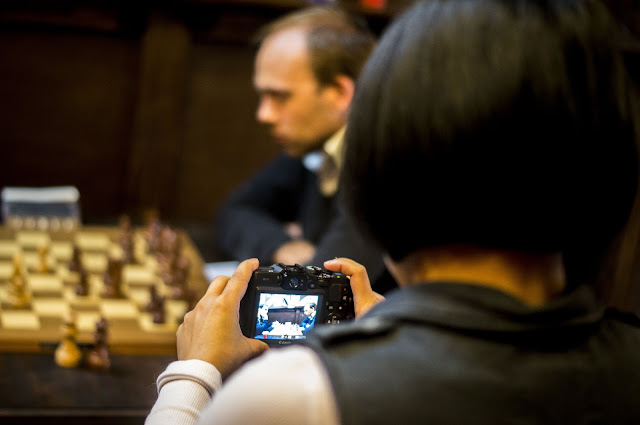 The game Peng- Van Eijk witnessed a rare appearance in master level of the sharp Blumenfeld gambit. Though she chose for the most promising theoretical variation white could barely boast any edge following the opening which might suggest that perhaps 17.g4. (Allowing a strong black bishop on h4) was too ambitious and the more cautious 17.h3 should have been seriously considered instead. Since she could not move a rook to e1 (though later Peng proposed to play it after all) Peng chose for a premature breakthrough in the centre which resulted in a totally lost position.

In white’s time trouble black made the classical mistake of accelerating his own moves too in order to create extra pressure on his opponent even at the cost of missing all his winning chances one by one. Here for example he could continue 31…Qe3+ 32.Kh1 Bf6 with a fairly easy win but instead he went for queen exchanges, immediately 31…Bf6 which left white with some hope of survival after 32.Qxe6 Rxe6 33.Rf5 Ra6? (33…Rc2!). The tragicomedy (if to use Dvoretsky’s terminology) reached its peak around move 50 when it was by now white who was seeking victory. Alas while searching for the right way she was caught in a threefold repetition!

The big upset of the round was undoubtedly the surprising, yet convincing, win scored by tournament’s “Benjamin” Jorden van Foreest (14) against the British GM Simon Williams. A side-line of the Fianchetto King’s Indian seemed fairly equal when the Englishman suddenly chose for an artificial and premature kingside “coffee-house” attack:

It has been the third grandmaster scalp within a year added to the growing collection of the u-14 European champion. 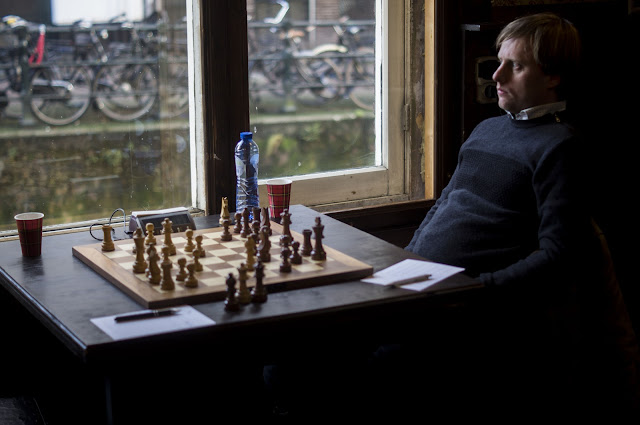 There was nothing much happening in the game L’Ami- Geirnaert where white could find no effective way to play for the edge. Multiple piece exchanges led rapidly to a roughly equal knight ending and the point was eventually split. The Belgian was quite content with the result “since as black I managed to equalize”. The Romanian IM (WGM) was apparently not as happy. 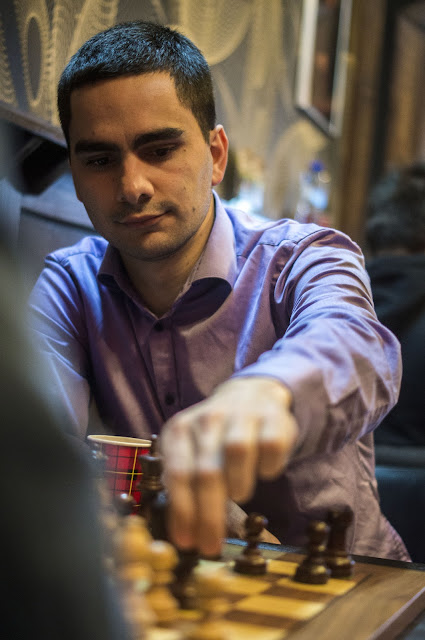 The longest game of the round was Van Delft- Burg, which following a balanced struggle, reached this ending:

White went for the final simplification to attain the justified peaceful conclusion: