A day before the 3rd Batavia Chess Tournament in Amsterdam, Gerald Hertneck didn’t know he was going to play chess. But during the tournament, there was never any doubt who would win it. “He’s in a class of his own,” said IM Merijn van Delft afterwards. “He used to be in the world’s top 50.” Hertneck finished on 6.5/9, half a point ahead of IM Robin van Kampen.

In the last round, Hertneck only needed a draw to secure clear first place. Van Delft was happy with that result too, as before the tournament he had secretly set himself the goal to score 50%. And so already after 11 moves this game was over. IM Manuel Bosboom and GM Praveen Thipsay already shook hands at move 7, but luckily the other three games were real fights. 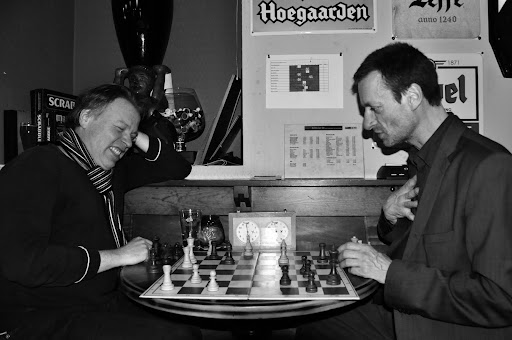 IM Benjamin Bok recovered from his loss in the previous round. He beat IM Robert Ris, who thus finished with 0/2 and in last place, with an end score of 2.5 points. In the early middlegame, Ris missed a chance to activate his bishop on a7.

For the rest of the game Ba7 would be a mere spectator, so 27… c5!? would have been a good practical choice. After 28. dxc5 c6 White’s extra pawn isn’t worth much, and the bishop can put pressure on e5 from b8. Later, Ris probably took too much risk on the kingside: 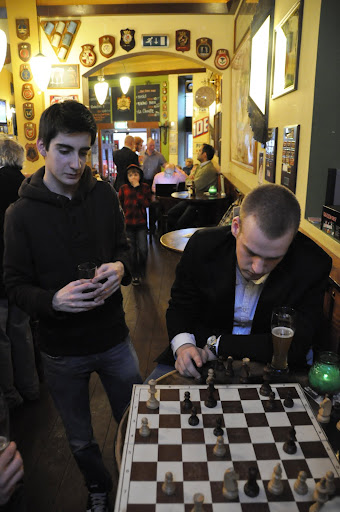 In the 8th round something went wrong in the opening, but a day later IM Robin van Kampen showed excellent preparation. In an important line of the Najdorf popularized by Boris Gelfand, he defended well against a typical piece sacrifice from IM Christov Kleijn. 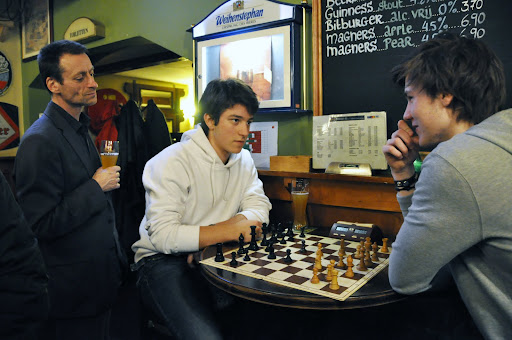 IM Bart Michiels admitted that he had been very lucky in his last round game against GM Niaz Murshed. “I was surely lost. He played the ending well for a long time, but then he made a mistake.” 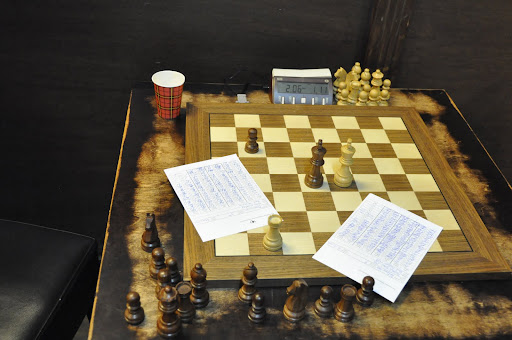 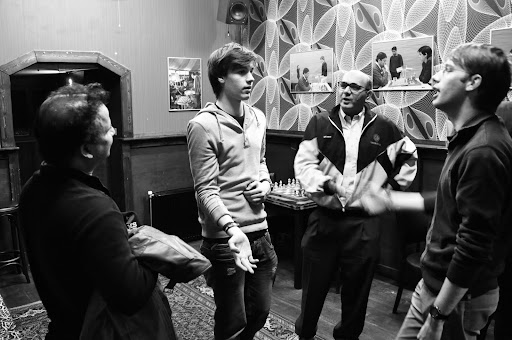 At the closing ceremony organizer Peter Tames thanked everybody involved. He was happy to see that the third tournament had been the strongest, and the most successful edition in many ways. Jeroen van den Berg awarded Manuel Bosboom the brilliancy prize for his win with White in the third round against Niaz Murshed. 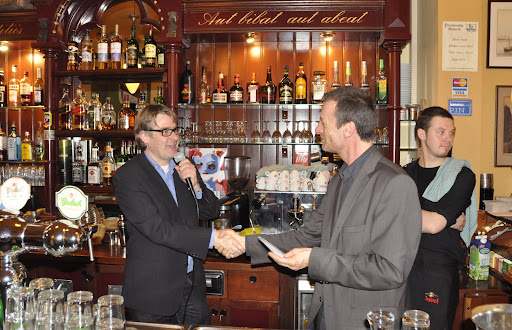 Tournament winner Gerald Hertneck also grabbed the microphone to thank everyone. It was clear that the German GM had enjoyed the tournament very much. 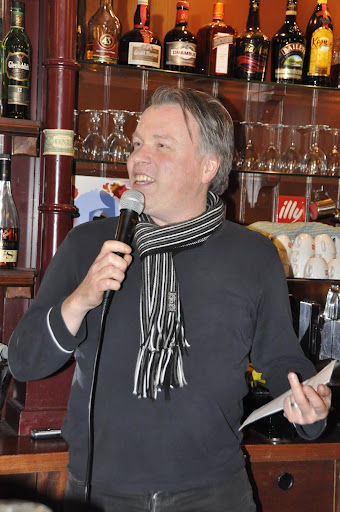 Let’s hear from all participants how they look back at their tournament (unfortunately we have to do without Manuel Bosboom’s comment):

Robert Ris: “I didn’t even play that bad, but I just threw away two excellent positions with a one-move blunder, what can you do. Today I lost to Benjamin, he played well. I could have defended better, but I cannot blame myself for that. I mean, I made a mistake, but this happens. But 2.5/9 doesn’t deserve a beauty prize. I don’t have an explanation for the blunders, because I played like I always play.”

Praveen Thipsay: “This one was bad, one of my worst tournaments. I played very badly, maybe one or two good games. Towards the end I started playing safe. I’m not used to playing closed tournaments. Things have changed since my active days. People prepared very well for this tournament. I play two or three tournaments a year and in between I don’t have time to study. This is probably not the way to play in modern chess.”

“I think this tournament was very well organized and the food is very delicious here also. Initially the weather was cold and tough for us but now it’s very good. The players are all very strong. Almost all are underrated because they are very young and their actual strength is more than this. It’s tough to play with them. So it was very nice to play, but also suffering for me.”

Christov Kleijn: “Ups and downs. I had some problems because of my lack of opening preparation. In many positions I had no idea what to do. I just didn’t have time to prepare well. [Kleijn studies econometrics in Amsterdam, and is busy with “many other things”. Merijn van Delft pointed out that he also has the black belt in judo.] “My play was slightly superficial. I did my best to calculate well but I think that if I had trained that a bit, I would have done better. A few times, I calculated a long line, and then when it came on the board, the position was worse than I expected.”

Merijn van Delft: “Before the tournament I was intending to go all the way in all nine games, but when I lost in both the third and the fourth round, I returned to my old habits. So… I’m satisfied with the score, but not always satisfied with my play. When I look back, I notice that there are still possibilities. Except for Hertneck, I shouldn’t be afraid of anyone. The young guys have a bright future, I mean, Benjamin and Robin are only 16, so that’s clear, but at the moment that’s not my problem. Right now I still want to battle with them. My play still shows many areas where I can improve.”

Niaz Murshed: “I played well but I made terrible mistakes towards the end. I don’t know, maybe I’m tired or something. I missed three wins, which I drew. Against Thipsay, yesterday Van Kampen and today Michiels. So that’s a bit disappointing. I have to go home and take rest, and then come back. But I’m playing well. Before the tournament also, in India, I won 20 points. Here at least I didn’t lose any points.”

“I liked the tournament very much. Coming back to Europe after nine years was very enjoyable. Unfortunately I didn’t get to see much of Amsterdam. Tomorrow [Monday – PD] morning I’m flying back.”

Bart Michiels: “A lot of missed chances, but I was also quite lucky. I had lost positions against Kleijn, Murshed and Thipsay, and scored 2/3 there. I also had winning positions against again Kleijn and Bosboom, but these were two draws. So I could easily have had two points less, or one point more and a GM norm. But I’m more or less satisfied, eventually, especially after today. But… I didn’t lose! How solid!”

Benjamin Bok: “It could have been better. I shouldn’t have lost in the third and fourth round. Against Thipsay I was better with more time, but then I just lost control and then I blundered somewhere. In the fourth round I was much better and then in timetrouble it went wrong. Practically speaking my chances for a norm were almost gone. OK, then I won three in a row, but then it wasn’t too handy to lose against Merijn van Delft. But he made it difficult for me, because he seemed to be playing for a draw. So in general I’m not too satisfied, it should have been better.

Robin van Kampen: “I’m satisfied, but it’s a pity that I had such a bad start. Otherwise I could have scored half a point more and win that last norm. But I’m happy that I came back strongly. Perhaps for the next tournament [Like Bok, Van Kampen will play the European Championship in France next month – PD] I should play a few games before the tournament, to get in the mood.”

Gerald Hertneck: “I look back with very good feelings. It was a special tournament for me for several reasons. One thing is that probably for the first time in the last ten years I played a closed tournament, so this alone is special. And then it’s special to play in a nice pub like this because really liked to be here. It’s very comfortable and the atmosphere is very nice. If I’m just talking about my chess games and my success, I would say that I was very lucky in the first round. Of course I was close to resigning this game, but then I played quite well. In the end I’m not so happy with my finish because I wanted to win at least one game from the last four rounds but somehow I didn’t manage. I think I came close but it was not enough and actually I think I should have made 7/9 but OK, I’m the winner of the tournament so I don’t have to complain.” 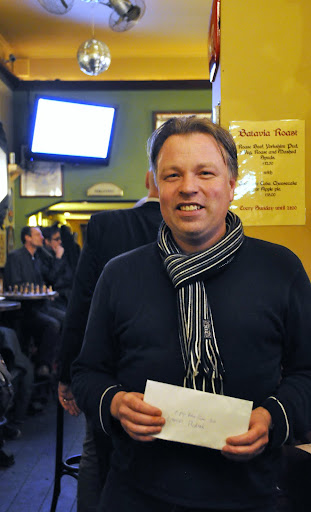