In a hard-fought eighth round, the last hopes of IMs Benjamin Bok, Robin van Kampen and Bart Michiels to score a GM norm were shattered. All three needed two points from the last two rounds. However, Van Kampen and Michiels drew their games, while Bok even lost. Gerald Hertneck shared the point with Praveen Thipsay to keep a one-point lead.

Already right after the opening, for Robin van Kampen a norm had become a mission impossible. Against GM Niaz Murshed, the Dutch IM fell into a small opening trap and from that moment he had to fight for a draw.

Many will recognize this position from the French Defence. In a line that was popular about twenty years ago (e.g. Timman-Jussupow), Black sacrifices some pawns for a piece. Here, Black has just castled, which is in fact quite a new idea. For example, Khalifman’s Opening Repertoire According to Anand doesn’t even mention it! White should play 14. Bd3 with interesting complications, but Van Kampen went 14. Be2 which was instantly answered by 14… d3! 15.Bxd3 Qb4! and because 16… b5 was also threatened, pawn f4 (and then also e5) fell.

In fact a number of white players have already fallen for this trap, and one of them was a regular visitor of the tournament, Lars Ootes (2350) against Rob Witt (2238), in Bussum last year. “It was really silly,” said Van Kampen, “because I knew about it. I was playing in the same tournament.” Did he think it was lost? “Yes, but he didn’t play the strongest moves. Especially …Qxb2 exchanging queens was weird.” 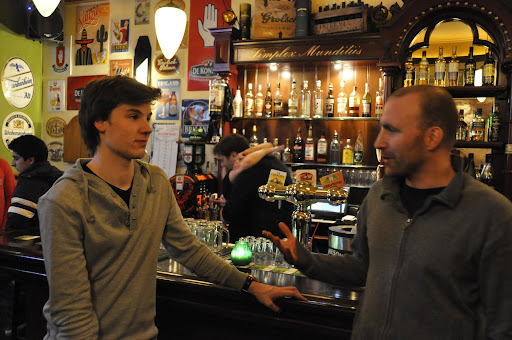 IM Benjamin Bok had to beat IM Merijn van Delft with Black, but his opponent didn’t really cooperate, to say the least. In fact it was arguably Van Delft’s best game of the tournament. He started with small surprise, playing his bishop to c4 on the third move, thus avoiding Bok’s 4…Nge7 Ruy Lopez. Actually,”he plays too many different systems in the Ruy,” explained van Delft.

A classical variation of the Two Knights appeared on the board, which should be completely equal. Somehow Van Delft managed to reach a better ending, and helped by his opponent’s timetrouble, even won it. “After the time control I spent half of my remaining time calculating a line I didn’t dare to play, which was a bit stupid. But except for that, I’m happy with the game and of course with the result.” (Van Delft) 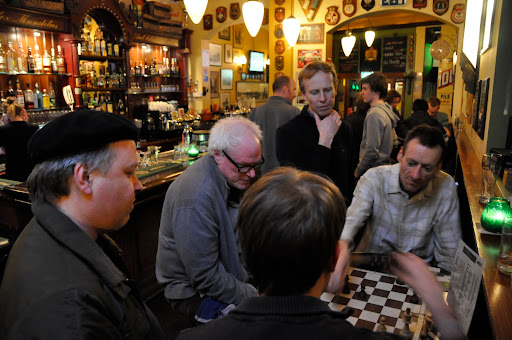 IM Bart Michiels did much better, and got a nice plus with White against IM Manuel Bosboom. However, in time trouble the Belgian spoilt everything. Bosboom: “It was an exciting and tough game. He was better for a long time, but it’s not easy to say where he could have played better.”

According to Michiels, he threw away his advantage at move 40. “I had 1.5 minutes left. I made my move, went to the toilet thinking I was completely winning. On my return, I saw 40… Qa4. I just didn’t see it. After that I should be happy with a draw.”

“It was a difficult time trouble phase,” said Bosboom. “I was a bit lucky because he won a pawn and somehow I won a pawn back. Then my kingside was compromised, so I’m happy I managed to save the draw.” In the final phase Black went for a win, but Bosboom didn’t think it was really winning anywhere. 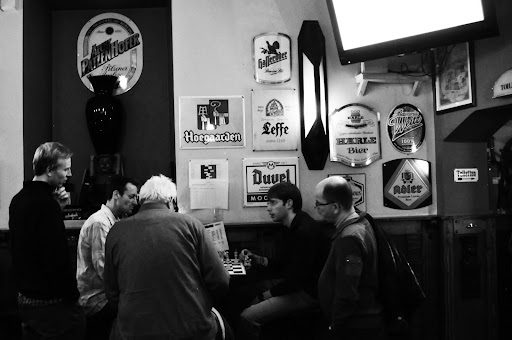 IM Robert Ris repeated his h3 line against the King’s Indian, with which he had beaten GM Thipsay smoothly. This time, against IM Christov Kleijn, it didn’t go so well. “I prepared it a little bit,” said Kleijn, “but not extremely deep. I actually mixed up the move order, but still I was quite satisfied after the opening. The game went OK for me. But at some point I made some silly moves, after which it was unclear again. In the end he just blundered. Not a game played on a high level. I guess tiredness played a role.”

GM Praveen Thipsay offered Gerald Herteck a draw already on move 13, but the tournament leader decided to play on. “I didn’t want to play another short game.” In a French ending he was slightly better and even sacrificed a pawn, but in the end the point was split anyway. 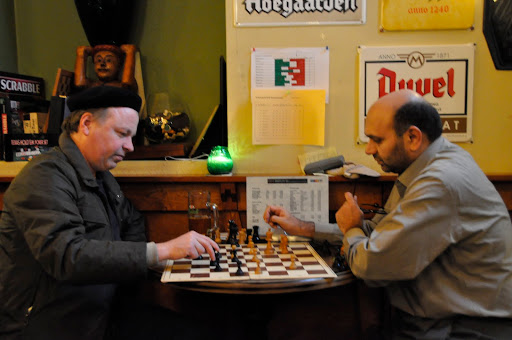