Wow, that was quick. Before ‘house photographer’ Bas Beekhuizen was done shooting, two of the player were already done shuffling. After about two minutes into the second round, grandmasters Niaz Murshed and Gerald Hertneck shook hands and arbiter Aart Strik placed their two kings opposed to each other in the centre of the board.

Unfortunately that’s part of the deal, with these GM norm tournaments: when the GMs play against each other, there isn’t always a good reason to risk losing.

Murshed: “I’m very upset about my first round game, so that’s why I took a quick draw today. I was a whole rook up yesterday, it was horrible. The last twenty games I played, most of them had gone well, so I’m not used to this.” He didn’t mind spoiling a white game. “It doesn’t matter; I need some rest, to get that off my head. Hertneck is a strong opponent so if I get into a fight with him in this mental state… First I have to get over it.” 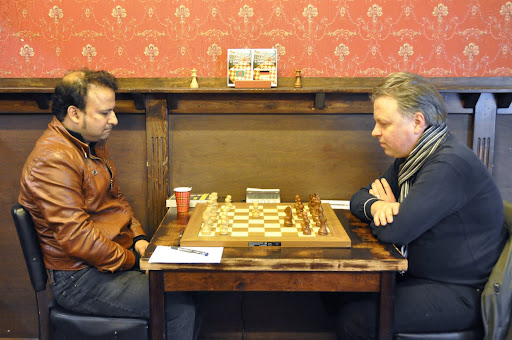 Hertneck: “I was a bit worried about my play after yesterday, and this is why I didn’t wanted to play a long game today. I wanted a safe day, a safe draw. In general I like to play every game, I like to fight. This is why I came here. But in this case, after this first day which was so chaotic, today it was not the right time to have a hard game.”

Murshed and Hertneck decided to take another rest day, and spent most of their Saturday enjoying some beers in Cafe Batavia and kibitzing about the other games, which are shown on a TV screen above the bar. Yes, where thousands of cafes world wide are showing (American) football, basketball or ice hockey, this bar has a blue, two dimensional image of 64 squares and 32 funny icons moving every now and then. Except for some good rock music, there’s just the quiet mumbling of variations to be heard. 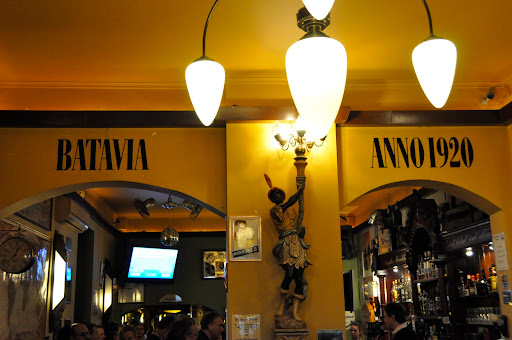 But still, during this round sometimes Cafe Batavia sounded like one of those popular sports bar. On the basement floor, the bar has some couches and a TV that was actually showing football – in this case the FA Cup match Everton vs Chelsea, (0-0 after ninety, 1-1 after extra time, Everton through on penalties). After about half an hour into the second round, a loud screaming could be heard, as in the 104th minute substitute Anelka wriggled free down the right and centred, with Lampard eventually lashing the ball home from eight yards out. On ground floor, the chess fans thought IM Merijn van Delft had been a bit too enthusiastic about winning a rook on move 8 (!) against IM Manuel Bosboom: 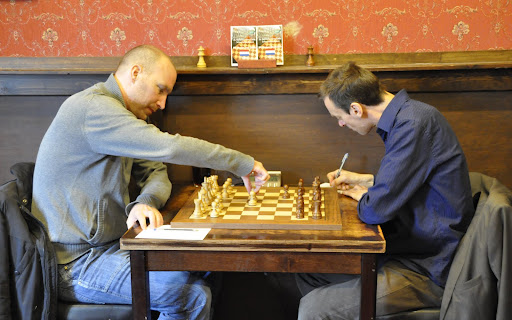 Later, a second moment of screaming and shouting could be heard from downstairs, prompting the chess arbiter to ask for silence. (He did survive that brave expedition.) Quoting the Everton website’s match report for a second time, we learn that it was Baines’ late moment of magnificence. His left-foot effort was measured to perfection and it beat Cech all ends up as it flew into the net.

IMs Robert Ris and Robin van Kampen drew a balanced game of only 26 moves. Van Kampen: “It was very theoretical. I didn’t expect him to go for this line because normally he plays something with g3, against almost any opening. But yesterday he went for an early Qb3, so I looked at that too. But OK, it was an Anti-Moscow and it took a while before we both knew what was going on. But we did play the main line. 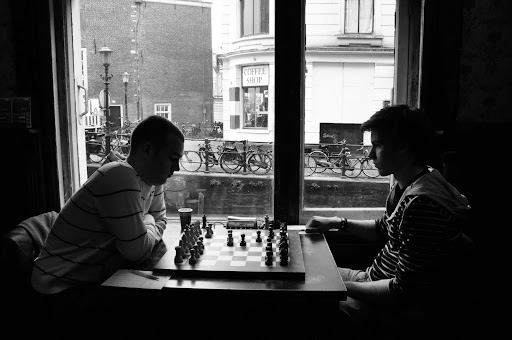 His 15. Bxb4 wasn’t the most critical move and he already offered a draw there. I played on a few moves, but it was just equal.” Instead, 15.d5!? is very interesting. It was tried by both Erwin l’Ami in a game against Henrichs in Vlissingen last summer, and by Robert Ris himself in fact, in a game that didn’t reach the databases. Ris, surprised about Van Kampen’s opening choice, didn’t dare to go for this move.

Bok: “His 36…g6! was necessary. Otherwise I play 37.f5, I run with my king to the queenside, forcing his king to join, and then I’ll have a breakthrough with g4-g5.” Instructive stuff – an example of the ‘two weaknesses’ endgame principle. 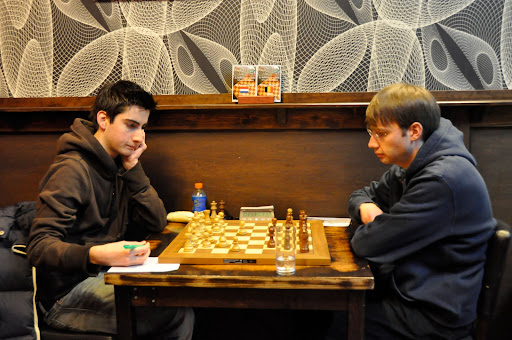 Michiels: “When I exchanged queens I thought it would be drawing this ending relatively easily. However, it was quite unpleasant. I had to defend very accurately, and I think I did. It was a more or less correct game.” In this tournamenet Michiels is trying to score his third GM norm, but he’s not too optimistic. “I think it’s extremely difficult to score a norm here. Everyone can beat you, and you can beat anyone. I’m not playing this tournament having the norm in mind.”

IM Christov Kleijn scored an excellent win against the experienced GM Praveen Thipsay from India. “I started well again, like yesterday,” Kleijn said. “This time my opponent didn’t manage to complicate so I could just continue playing in a relaxed way. But I do think he could have drawn the ending, not too long before the end. But I did play the ending quite tricky, and he had some time-trouble again. After move 40 you get an extra half hour, but before you know it you have used this!” 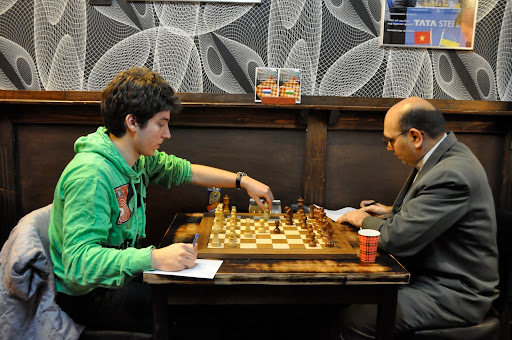