The first round was scheduled on Friday as well, less than two hours after the opening ceremony. This meant that the players couldn’t really prepare for their games, although one of them could be seen behind a laptop between 12:30 and 14:00 anyway! At a later stage we might reveal who he was…

The drawing of lots resulted in a number of interesting pairings for this first round: the clash between Indian GM Thipsay vs GM Murshed from Bangladesh, the two talented Dutch IMs Van Kampen and Bok against each other, and also the game between co-editors of the weekly PDF magazine ChessVibes Openings, IMs Robert Ris and Merijn van Delft.

Gerald Hertneck started with a not too convincing victory against IM Manuel Bosboom. The German GM, top seed in Amsterdam, said: “I want to play logical, positional chess. This was exactly the opposite!” 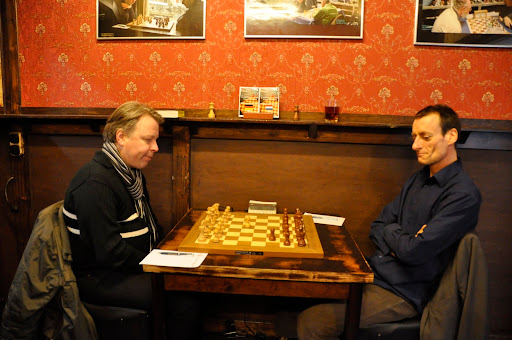 Yes, logical chess is too much to ask against Bosboom, known not only for his blitz skills, but also his non-theoretical openings. This time he went for 1. d4 g6 2. c4 Bg7 3. Nc3 c6 4. e4 a6 with Black! However, Hertneck’s treatment wasn’t strong, and Bosboom missed several promising continuations. Just before the end he blundered in a winning position: 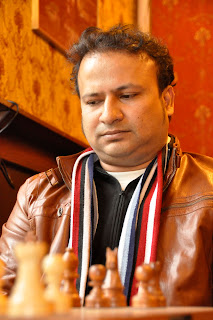 Niaz Murshed is the fourth player of Bangladesh, but somehow his name sounds more familiar than the three higher rated GMs from his country: Ziaur Rahman, Enamul Hossain and Bin-Sattar Reefat. Niaz told us that he didn’t come to Europe for nine years, so he didn’t have to think long to accept the tournament invitation. He has been around for a long time in fact, and played tournaments in Europe until 1996. Then he got a job as a business developer, but recently he returned to the chess world, and now he’s a professional player again.

His start was ‘horrible’, as he described it. “I was winning hands down and then I made a really childish mistake. I am in good form currently, so I should have won that game very easily.” We cannot argue with him:

IM Benjamin Bok won quite quickly with Black against IM Robin van Kampen, using the Jaenisch/Schliemann (3…f5) variation of the Ruy Lopez. But it wasn’t the opening; Van Kampen still had a slight edge around move 15. “Then, I thought he just blundered a pawn, but it was some kind of sacrifice. I didn’t foresee that he would get that much compensation. I had to give up my centre to hang on to that pawn, but I probably should have just returned it at some point. His attack was just too strong,” Van Kampen explained. 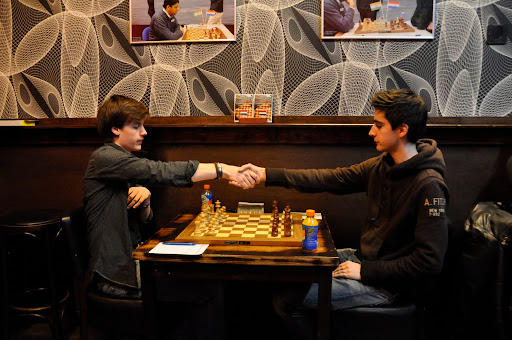 IM Christov Kleijn, who is defending his Batavia title this year, played against Belgian top talent IM Bart Michiels. The Dutchman could only be satisfied about the opening phase. “This went much better than I expected, because I really don’t understand that Bc4 Najdorf that much. But it was OK; I got a good position. Then he started to complicate and I started to miss things. Instead of keeping things simple I joined the complications, and at some point I was even lost. But then he started making mistakes as well and so luckily I got away with a draw.”

Bart Michiels agreed with Kleijn’s evaluation: “It was actually a pretty bad game from both of us. At some point he was winning and he also had much more time, around move 25. He started playing too quickly and underestimated some counter-chances. 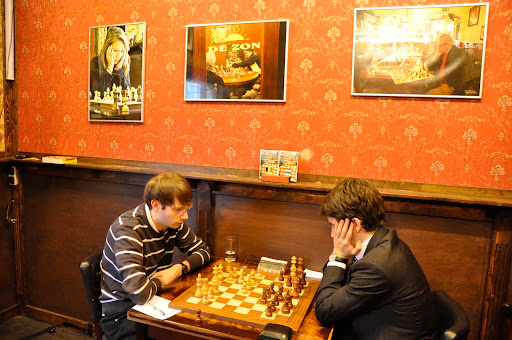 The game changed completely, and I got a winning position. But then in time-trouble I didn’t find the easiest way to win it and after move 40 I’m still winning, but I spoil it anyway. The game didn’t deserve a winner.”

Last but not least we’ll mention the draw between IM Merijn van Delft and IM Robert Ris. The two are good friends, but this doesn’t mean they’ll go for a quick draw. In fact Van Delft managed to reach a winning position with Black, despite facing a surprise in the opening (5.Qb3 in a Semi-Slav). “I didn’t play the critical moves, and this allowed Black to play the important …c5 break without problems,” said Ris.

“With 23…Qa3 I chose the wrong plan,” said Van Delft. There 23…Qc5 is close to winning for Black. With the cunning 24.Kh1! followed by Rg1 Ris managed to create threats on the kingside which eventually were enough to force a draw. 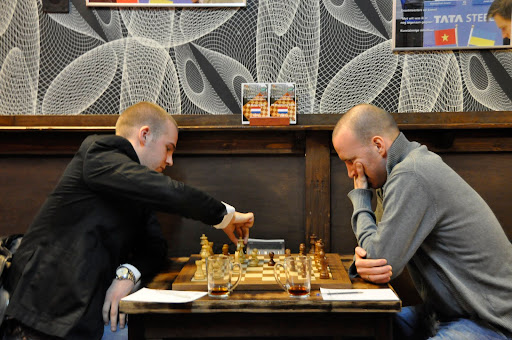