We have a website! And now it’s there, why not just start discussing the tournament? Luckily it has only been running for two rounds, so we haven’t too much catching up to do. Well, in fact already ten games have been played, so we better hurry… with a report about the opening ceremony. Soon after, we’ll talk about the first two rounds.

On Friday, February 18th at 12:00 the opening ceremony of the 3rd Batavia Chess Tournament started. Unfortunately Secretary of State Fred Teeven couldn’t come, as he unexpectedly had to attend an extra meeting of the Minister Council. Therefore, tournament director Jeroen van den Berg and organizer Peter Tames did the honours instead. 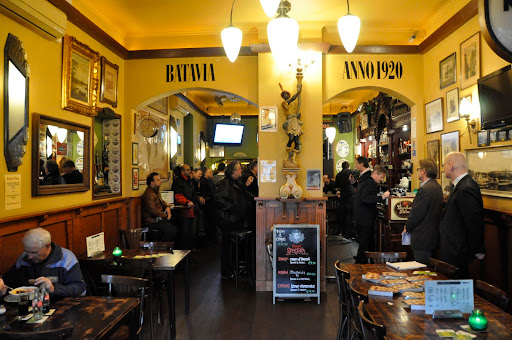 Tames started with telling that another person hadn’t been able to come. In fact, it was one of the players! What was the case? On his way to the airport, GM Dibyendu Barua from India became unwell, and had to be taken into hospital with heart issues. At the moment of writing he’s still in hospital for observation.

One can imagine it to be quite an effort to arrange a substitute at such short notice, especially someone who is strong enough to keep a GM norms possible for the seven IMs. However, relatively quickly the organizers managed: German GM Gerald Hertneck, in fact higher rated than Barua, agreed to play, thus increasing the average Elo from 2442 to 2450.

Hertneck: “I’m an IT project manager for the city of Munich. I was at work, and I got a phone call on Thursday morning. We exchanged some emails and quickly agreed. My boss said it was OK, I went home and packed my bags. After a seven and a half hours train ride I arrived at ten pm in Amsterdam Central station, quickly dropped by at the cafe and then went to bed.” And then, the next morning, the German Grandmaster was the first of all the players to arrive in Cafe Batavia!

In his speech, Tames had some good news: thanks to its main sponsor Grolsch, a Dutch beer brewery, the tournament has been secured until the year 2015. In a period where many tournaments are facing difficulties and others are simply dying, this was especially nice to hear.